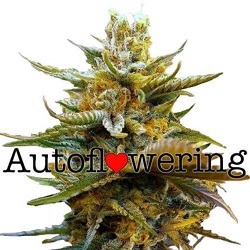 The G13 Cannabis strain is an Indica-Sativa hybrid known for its strong effects and mysterious past. Allegedly created by the U.S. government in the late 1960's, it's become a world-wide best-seller. Loved by recreational and medicinal users alike, enjoy strong cerebral effects and a powerful 'body-buzz. Now available as G13 Autoflowering seeds, it's easier to grow and faster to mature.

The addition of the Ruderalis gene into the feminized strain has made no different to the buds appearance, taste or effects. Once mature and harvested, it's impossible to tell any difference. The 70% Indica, 30% Sativa genetics remain the same, producing hard, dense buds with a skunk, earthy aroma and sweet citrus flavor.

It has however, made a huge difference to the way the plants grow, flower and develop. Unlike the original feminized variety, G13 Autoflowering seeds do not require a change in light-hours, or long periods of daily darkness to bud and mature. Simultaneously growing and flowering, almost from sprouting, the plants combine both cycles together. This reduces the total time from germination through to harvest to a minimum.

With no requirement for twelve hours of darkness to mature, G13 Autoflowering seeds can be planted outdoors at anytime of the year. However, they produce their biggest and best quality harvests when subjected to as many hours of strong, direct sunlight as possible. Cultivated outdoors from Spring through until late Summer, individual plants can yield between 4 - 6 oz of the highest quality buds.

Total growing times are much faster than traditional feminized seeds, especially for outdoor Cannabis growers. Instead of planting in the Spring and waiting until late September to harvest their plants. Cultivating G13 Autoflowering seeds outdoors requires just 9 - 11 weeks from sprouting through to complete maturity. This allows for several crops to be successfully produced throughout the Summer months.

Small, squat and dense, G13 Autoflowering seeds don't produce the large plants the feminized seeds are famous for. However, they are easier to grow and faster to mature. Regardless of your knowledge or experience, producing your own potent G13 Cannabis buds couldn't be easier.

Powerful THC levels of up to 24% invoke a complex high. Felt at first as a cerebral euphoria, the Indica effects slowly creep up on you, relaxing the body, helping to reduce stress, aches and pains. Often referred to as an evening strain, it can provide a boost of euphoric energy, perfect for socializing with friends.

The introduction of G13 feminized seeds was an instant success. Now faster to mature and easier to grow, these G13 Autoflowering seeds are proving to be just as popular.

You can buy G13 Autoflowering seeds in packs of 5, 10 or 20, all sold with guaranteed germination as standard by I Love Growing Marijuana.

All USA purchases are shipped directly from their base in Modesto, California. Enjoy the very best ‘stealth’ postal and packaging techniques. Receive fast, guaranteed delivery on every purchase, with any lost or missing deliveries replaced totally free of charge.

Guaranteed FREE shipping to USA
All orders are shipped within 2 business days in discreet packaging.

Guaranteed Germination
If you follow the germination instructions exactly and your seeds do not germinate, then they will be replaced for free.